A “Lost Case” and weird dreams: cries for help from a loved one.

“Yes”, I thought to myself (hiding the little Yorik skull inside my briefcase. “What am I thinking, prosecuting this woman outside of her own jurisdiction?”

I look back and see the jury again, I mean, the various versions of me and think that I might be having an LSD flashback from when I took that shit on 3 occasions, driving my Mini Morris Van up and down Scotland. But that’s another story. I was 17 years old then.

Now, a week later after my attorney and I decided to drop the case, I found out some terrible things. One, for example, is that the (so called) American Bar Association he belonged to had nothing to do with the Lawyer’s Union. It was, if anything, an association of former Alcoholic Anonymous members who drunk in hiding at some building in lower Manhattan, called the American Bar Association PUB. In there, you could find all the possible and existing spirits in the world. But the spirit I was after, had nothing to do with alcoholic content. I was after a microtonal, minimalist and exoteric spirit (of the spiritual kind) and I was hoping to resolve the question of the lost case and its altered pages by finding a Kabballah-voodoo-umbanda-crystal ball speaker.

I wake up in a panic. Weird dreams. Mother sits. Mother hacks a human being and cooks him. Mother serves the meat in deep round bowls. Mother, well, well…mother nothing! Dead bodies wash up on the beach. Five of them.
From the quality of the sand, I find that the similarities between this picture in my mind and the texture of the sandy beaches in Belmar, New Jersey, are simply astonishing.

After sipping my first espresso of the day, I look out that one window she jumped out of and felt an incredible feeling of solitude. 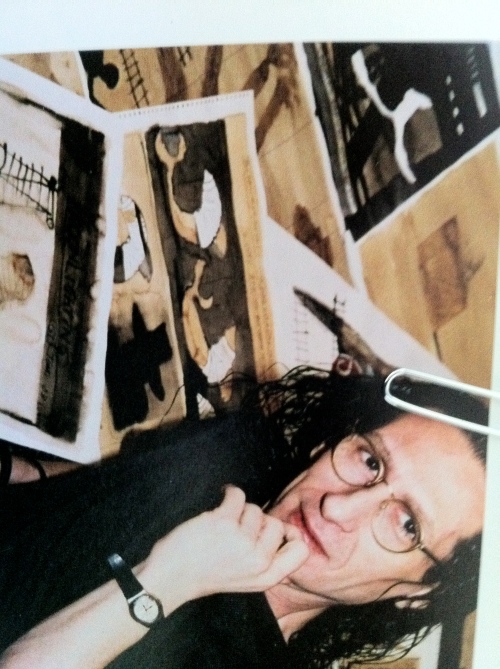 “Lost Case..(novel) soon to be released together with a book of paintings / drawings – “Coffee Noodles”

3 fun (and short) videos to watch: nostalgia, stuff from the past

Comments Off on A “Lost Case” and weird dreams: cries for help from a loved one.

This was the 4th play in Brazil after all the Becketts and heiner Muellers here in NY at La MaMa and the Theater for the New City: after Julian Beck told me “go down to Brazil, form a company and do what you do here in NY but on a HUGE scale – then come back to NY and you will be guaranteed the front page of the Arts and Leisure (NYTimes). And history proved him absolutely right. Here I had done the Beckett world premieres, the Heiner Mueller and so on. EletraComCreta was written by me so that I could attract the Brazilian
“Concrete Poets” – Haroldo de Campos, Augusto de Campos and Decio Pignatari – before this Eletra I did Quatro Vezes Beckett (a replica of the new york “Beckett Trilogy” (1985), Quartett (Tonia Carreiro and Sergio Britto 1986) and CarmemComFiltro (Fagundes and Co. Sao Paulo 1985)

How attached one becomes to attached posters and picture on the wall after a flood: Beckett on the left, Poster for Waiting for Godot (1990 Munich), poster of All Strange Away (1894 La MaMa NY) and tiny “post it” notes.

Comments Off on Visual autobiography # 4 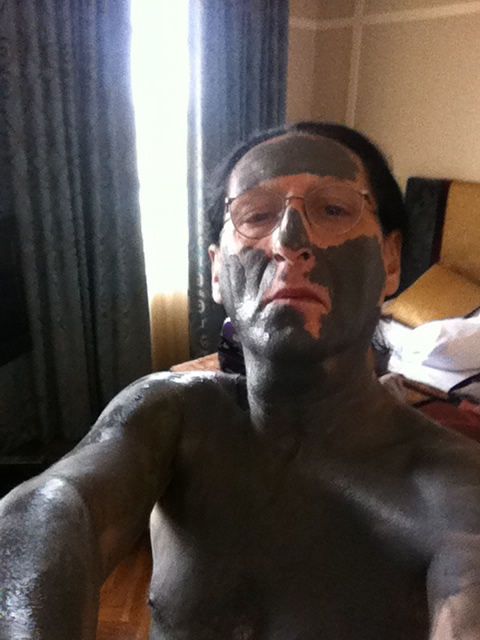 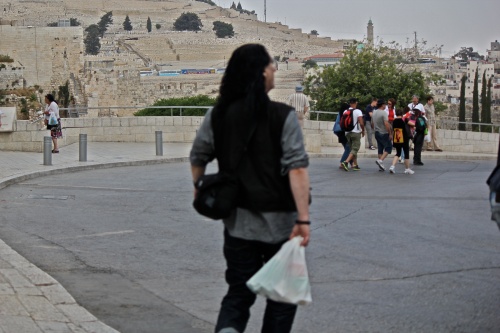 Walking to the Wailing Wall for the last time 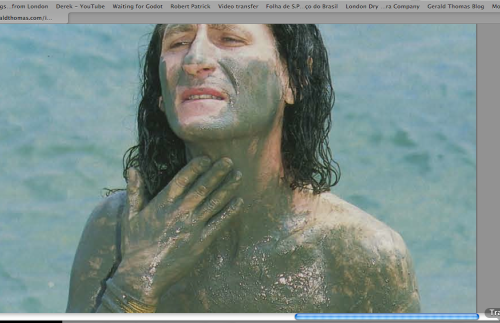 Covered in Dead Sea Mud: dead but active. How’s that for a…paradox?

Under the Wailing Wall wondering about the real value of Facebook. I need psychiatric help!

Comments Off on Suffer, Gerald, Suffer ! 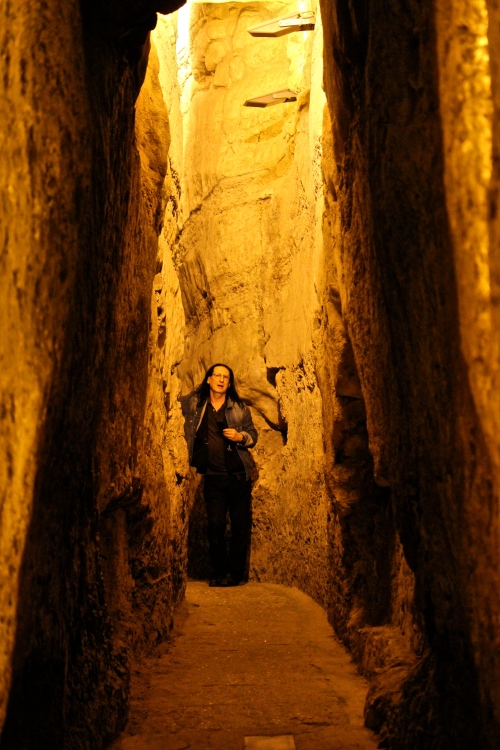 Me in a shaft of light under the Wailing Wall

Under the Wailing Wall

Under the Wall: Herod’s cisterns

Under the Wailing Wall: window to nowhere 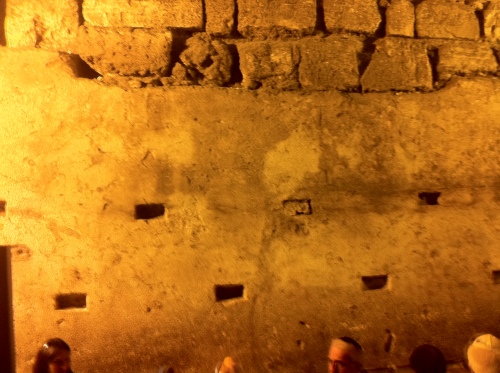 Under the Wailing Wall – the unmovable 600 ton stone

Comments Off on From Jerusalem 2

I used to be the most skeptic and cynical son of a bitch. That is, till yesterday. Till yesterday I saw religion as a guise or a costume just like the costumes we use on stage.

But yesterday, floating on (or in), or (dare I say) above the Dead Sea, I had an insight. My arms extended to infinity and so did my feet. My eyes were sore from the salt water but I had a clear view of the hazy sky, 422 meters below sea level.

What can I say? Will my friends laugh me out? Who cares! Arms and feet extended, I was “drawn” upwards, while covered in mud and itching all over.

What can I say?

Upon returning to the King David Hotel, I threw up all the food and liquid I’d taken in and was up all night dehydrating. The toilet and its vicinity were one big tahini mess.

No, no self help texts, no help anything texts. However, one thing is for sure: Jerusalem has powers beyond ones control. I’m emotional about things that may seem so silly to someone who has practiced atheism for so long:

Fear not! I’m not converting you.

Actually, I wouldn’t know what to convert you into. A radical Jew? I mean, orthodox or Hassidic vine leaf? Or a Franciscan monk or priest or a cup of Nespresso or Illy Cappucino? Or a devout Muslim or…What? What exactly would I try to convert you into? A new Moses, perhaps, stuttering all the way out of his basked or coming down from the Mount Sinai (hospital) in tears whilst looking at what his brother was producing on Madison Avenue, all this “theatrical mess” down here, around Jaffa or Haifa or , even, in Egypt.

No, not today . No more fun with words. This is getting serious and my respect for the light has erupted like hives on my skin. From now on it’s all a matter of who believes in what and I respect that, no matter what the ceremonial platter and protocol may be.

Heads covered by scarves or balding heads, shaven like ravens, I simply look at them all as pilgrims looking for their lost ones and clinging on like Klinghoffer. No different than your usual suit and tie. No different.

Half of me is gone, GONE, finished, evaporated. The other half is growing again or will grow again, someday somehow.

I’m in a daze and, to be quite frank, don’t even know how these words are coming out of these half numbed finger tips, still brown (this time from the hard core Turkish coffee I drink non stop from date to date, honey to honey, figs to figs, nuts to nuts and ashes to ashes. That’s how I’ll end up, next to Schindler’s tomb hoping that my epitaph will read something like: “That was it?”.

I’m faintly dead on the ground looking up and thinking: “am I still thinking?” Have I turned into Bill Clinton? Paulo Coelho? Amy Wine Winehouse?

Ok. Done. Jerusalem, you’ve institutionalized me. You’ve driven the sane one out and have given full power of attorney to the madman.

INRI and garlic were the sounds or words I heard involuntarily thru the night. INRI, of course. Garlic, can’t stand it.

Yet, I still smell of sulfur. Of course, that is the smell which seems to be expelled by my skin or my organism because of the salt and the mud. Suddenly I was a Dead Being, saying dead things, a walking Tibetan Book of the dead floating above the Dead Sea or the Red Sea or the Jordan River.

Hello everyone. Here I am: the Brazil nut in human form. Enrollment next door at a very dicey price. The club, of course, is extremely exclusive!!!! You all know what I mean.

Comments Off on From Jerusalem !

And here’s to the impossibility and improbability that we, as humans, will ever live together in peace: 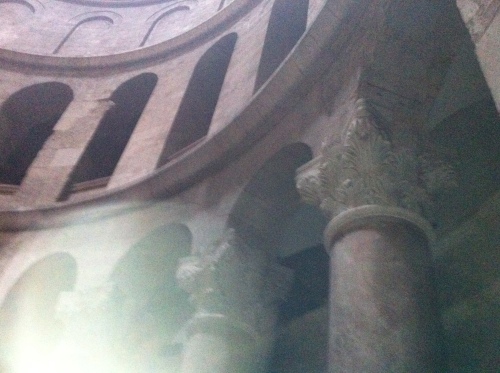 Inside the Saint Sepulcre

Comments Off on And here’s to the impossibility and improbability that we, as humans, will ever live together in peace:

Here is to heath insurance companies who debit (drain) ones account and here’s to the credit card companies in general ! 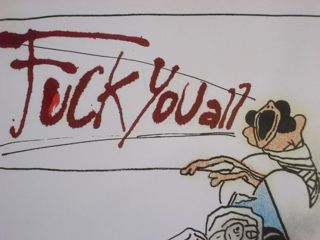 To the credit card companies

PS: If you visualize this blog with an add from a Health Insurance Company, please disregard. I don’t know who these guys are and how they infiltrated this blog</strong>

Comments Off on Here is to heath insurance companies who debit (drain) ones account and here’s to the credit card companies in general !

From my novel: The Lost Case of a Brief Case (a deep dive into nowhere)

“Where you here in this room Sir, when it happened?”, “Yes I was. Here’s her glass of scotch and here is the last tampon she’d just changed in the bathroom before the tragedy occurred”, I pointed out. “why are you pointing out the tampon, Sir?”, this NYPD actor-like detective asked me inquisitively. “Because the glass as well as the tampon contain strong traces of her DNA”, I said unwillingly and in a daze close to stupidity since (I don’t believe) this had even started yet to become a murder investigation.

“What about your door , Sir? Was it open during your talk with her?”.

At that moment I froze. The door? My door to the hallway was open?

It was only then I realized a horrible thing.
She sat across from me looking right into a rather large mirror which hung on the wall above my other couch and above my head.

“Was it that…? No.”, I don’t want to conclude this thought. Was it that she might have seen him through the mirror while I was in the midst of talking about dates, Beckett’s funeral arrangements and feeling trapped up there in Wengen feeling the impotence of a world without cell phones, smart phones, iPads, emails, twitters, social media and text messages all yet to come?

What had she seen that prompted her to her death in a matter of seconds?

“Could it be that she saw the future, while I described Beckett’s death?”, I thought quietly while the NYPD were pinning me down.
“But we ARE in the future of 1989. This is 2012 and….”. Yes, it was making less and less sense as the minutes ticked by.

”Yes, detective, it was all a matter of seconds and her body (al-al-al-ready in motion) (I was beginning to stutter) defied any possibility of my interference in stop-stop-stopping her from flying out the win-win-window”, I said in a half rage tone, stuttering, always trying to watch the levels (my internal gage, the ever failing one), always aware of my pitch and the way it could be interpreted.

I was completely innocent of her death. Yet, in that situation, I was pretty ready to sign a confession. Why is that? How can it be that I was in such a state, ready to confess to having murdered her when, in fact all I wanted – if only I’d been given the chance – was to have prevented her suicide.

The words by that detective were beginning to carve a river in my head.

Comments Off on From my novel: The Lost Case of a Brief Case (a deep dive into nowhere)